I’m not sure why they call it “red”.  Red sand, red center, red rock.  No, it’s orange. Brick orange. Tennis court orange. Netherlands oran… nah, not that much :).  I don’t understand why the Australian Open is not played on clay. There’s so much of it, we should be seeing Rugby and Cricket games played on clay as well.

By the way, after the rather limited “success” of the New Zealand post (Sandra blames it on the Christmas Season, I blame it on the way-too-long past posts and excess of landscape pics), this time I promise I’ll make it shorter. There’ll still be some postcard pictures, I’m afraid (hey, it’s Australia).

Anyhow, after the New Zealand journey, we flew from Queenstown to Melbourne and spent a few days there, with an Airbnb Chinese-Indonesian couple in a cute apartment that looked more like the room of a teenager in Tokio. I’m sure Pikachu was hiding somewhere in that living room.

Cool city, Melbourne, with its “lane culture” -meaning all those narrow streets full of cafes, bars, restaurant, shops-  and street art. So much street art.

We’ve seen so much street art in so many cities in the past months, it’s like when tourist offices brainstorm on how to attract more tourists, sooner or later the marketing officer will say: “I know! Let’s promote street art! Street art is hip!”

We also heard more of those “Southern-Hemisphere” superlatives Australians seem to love so much… plenty of “the biggest/longest/oldest/greatest ___ (fill in the blank)” … followed by the disclaimer “in the southern hemisphere”. All Europeans and North Americans in the tour will inevitably smile with an air of superiority, when hearing them. Southerners like us stay silent. Oh-well. 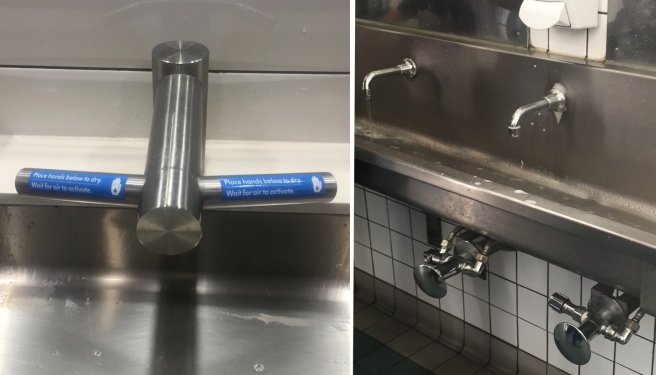 – and that’s how you fit a public toilet –

A few pics from the Melbourne stop (apologies if you were expecting to see what the city actually looks like, you can Google that): 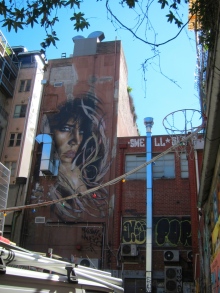 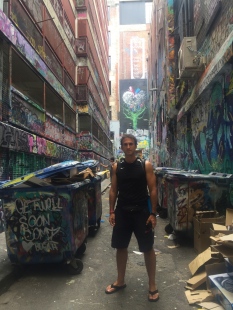 Paint all you want, but no posters. // Pinta todo lo que quieras, pero no pegues posters. 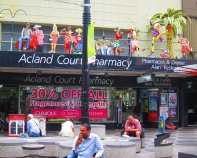 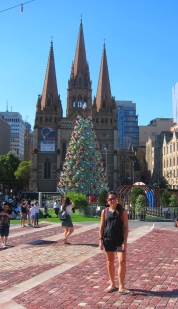 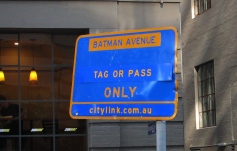 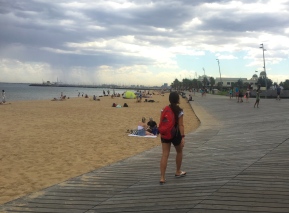 Melbourne was our base for a 3-day drive through the Great Ocean Road, enjoying amazing views of the red (read orange) cliffs and beaches, as well as the ultra-famous 12 apostles (of which there are only 7 or 8, by the way, as far as I could count). We also finally spotted some Koalas in the wild. Very nice, however not sure if I would label it -like some do- as “the greatest drive in the world” and/or “the ultimate must-do in Australia”.  Australia is so much more than that. Check the pics:

All of this to be back at Portland! // Todo lo que tuve que hacer para volver a Portland. 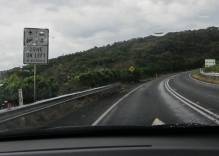 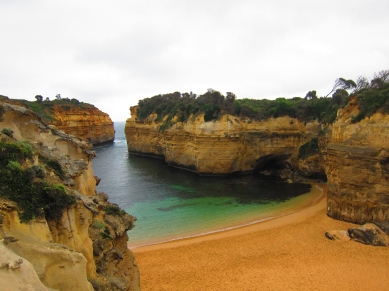 See how it was before the chinese bus? // Ven cómo era antes del bus chino?

Another impressive one. // Otro “apostol”.

“Nah, I won’t be another girl taking pictures of Koalas”. // “Me rehuso a ser una toma-fotos más”. 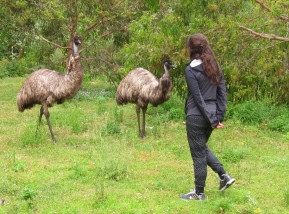 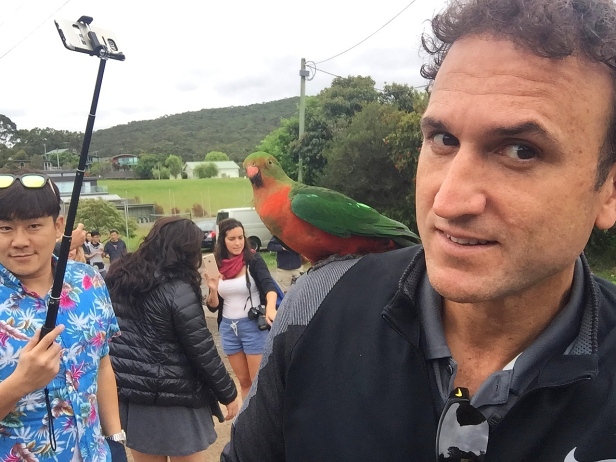 I’ll stick to the smaller ones. // Yo prefiero a las más pequeñitas.

China is in the house

We had been warned… and to some extent we also see it in Europe, but like with anything else, you must see it for yourself to really know what it feels like. Now… I will first say I have many Chinese friends and they are great people… but Chinese tourists… I mean the typical, rightly stereotyped Chinese tourists… man! How to put it and still be politically correct?…

There are many, many, MANY Chinese tourists in this part of the world. Any “attraction” can go from ultra-quiet to over-crowded in a split second, when they arrive in masses in their big touring buses, with their sole mission of breaking the world record of pictures-per-minute, while talking at about 28 decibels higher than the human average. And probably because of a language barrier -older generations in particular-, they won’t even make eye contact or try to interact with others, not even if they just bumped into you and knocked off your drink (because you were in their way for the next photo of a random tree branch). They won’t listen to their own tour guides. They descend, walk around, take pictures, talk loud, take more pictures, walk around, ascend and go. And repeat. We did meet some younger, English-speaking Chinese, traveling in couples. Apologies to them if these comments hurt their feelings.

The highlight of this second stage in OZ. We flew to Alice Spring, in the center of the country.  From there we took a low budget (which by no means was cheap) 3-day/2-night tour to the famous red center (once again, read orange).  We slept in the open under a thousand stars and walked under a thousand suns (at least it felt like that), cooked our food over the campfire and woke up at 4 am for 3 days in a row.  Great Australian invention, these “swags” … sort of a rolled thin mattress inside of a canvas cover, which you lay on the ground and use as an envelope for your sleeping bag. 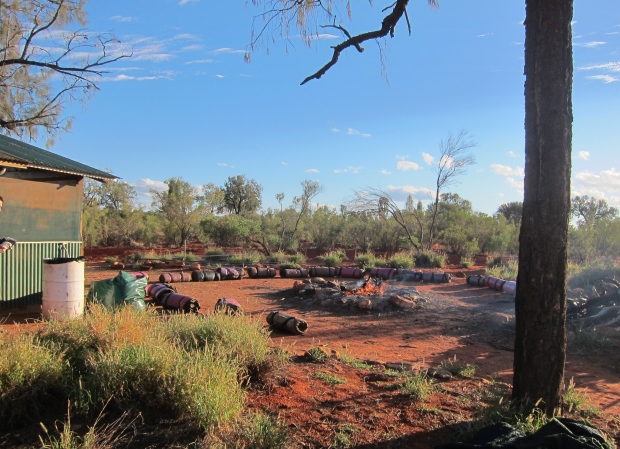 – swags and bonfire ready for the night –

Uluru was as impressive as they say it is. You’ll probably think of it as a that rectangle-shaped, bi-dimensional “hill” you see in all postcards, right? … well, it’s MASSIVE …and full of curves, caves, waterholes and shapes. Originally blue-gray, tinted orange due to oxidation and of great significance to the aboriginal people since forever, we truly enjoyed walking around it, learning its stories and looking at it from all possible angles, at sunrise, under 40 degrees and at sunset. We also laughed at the champagne-drinking fellows who had paid for the more expensive tour -and most likely didn’t have to learn what a “swag” was. 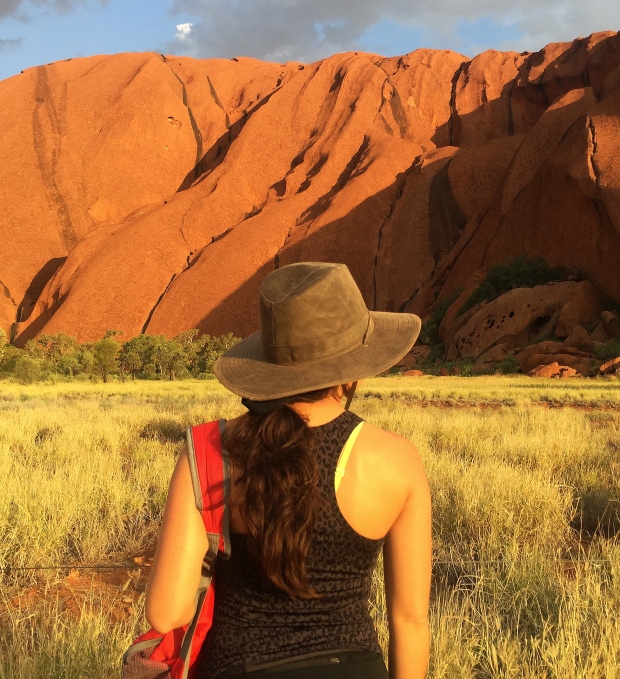 We also visited the lesser known but equally -if not even more- amazing sites of Kata Tjuta (aka The Olgas) and Kings Canyon… same color but totally different composition. Uluru is a massive rock … Kata Tjuta is more of an agglomerate of gravel. Check the pics (I’m trying to keep it short with the text, remember?). 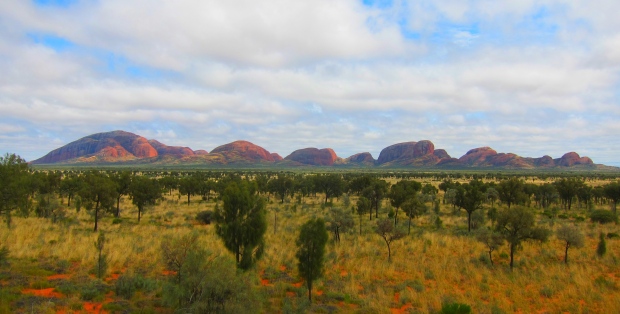 – Only from the distance can you fit all of Kata Tjuta in one picture. It’s huge. –

In short, great experience. It’s so frustrating not being able to properly capture in a picture the magnitude of everything you see. Views are so impressive, that the best you can do is watch carefully and try to memorize them, because no picture will ever do them justice (certainly not the amateur ones I am able to produce).

The tour finished back in Alice Springs, with a nice team dinner/party, where our Korean friends, who hadn’t interacted with anyone else during the 3 days -and were ALWAYS late- went nuts as soon as the DJ played “Gangnam Style”. That DJ, by the way, didn’t have any Latin music, not even one from Shakira. “Hey, this is Alice Springs, not Sydney”, he justified himself.

Here the pics… get ready for a lot of Uluru (and a lot of orange): 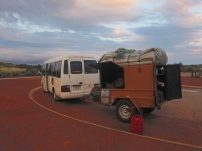 This was our transport. // Este fue nuestro transporte.

Yup, we also saw it like that at first. // Sí, también lo vimos así al inicio.

… but then you get closer // … pero luego te vas acercando 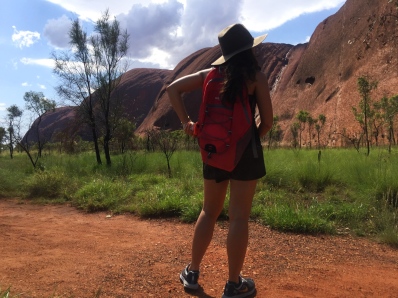 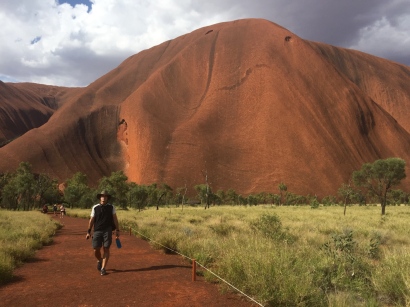 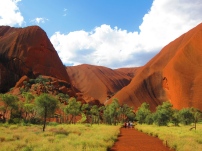 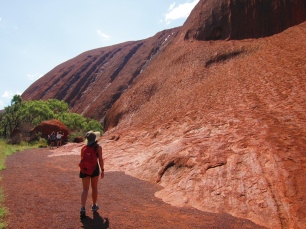 Some of its weird shapes . // Algunas de sus curvilíneas formas.

One of the main waterholes at the base. // Uno de los principales pozos de agua en la base. 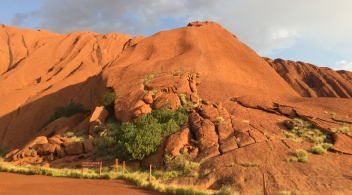 This is where people used to climb to the top (which you should not do, being it a sacred place). // Por aquí es que la gente solía trepar (lo cual no se debiera hacer, siendo un lugar sagrado). 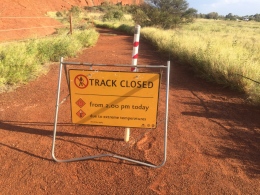 One of the many viewing points. // Uno de los muchos miradores. 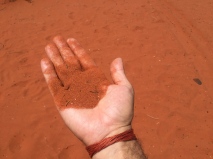 As far as your eyes can see. // Hasta donde te da la vista.

Sunset, next to the champagne-drinkers. // Puesta del sol, junto a los toma-champagne. 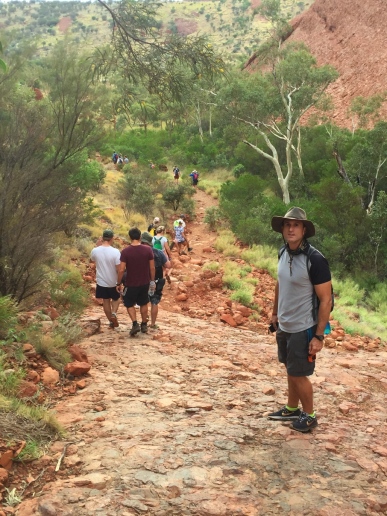 In this Panoramic view you can see both sites (Uluru to the right, waaay back). // En esta panorámica se puede ver ambos lugares (Uluru al foooondo a la derecha). 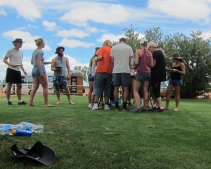 We stopped along the way for lunch. // Paramos en el camino para almorzar. 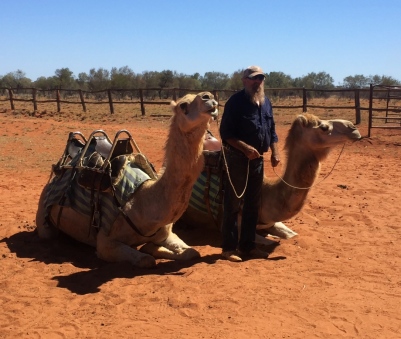 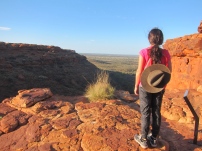 Always good to check… I was right on target. // Siempre bueno controlar. 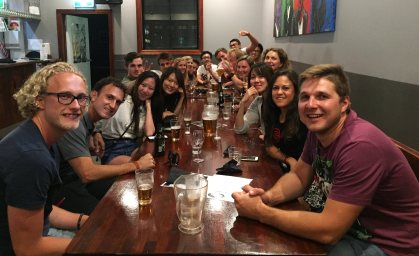 These ones didn’t survive. // Este par no sobrevivió el paseo.

…but it got a nice replacement. // … pero tuvo su buena reemplazante.

Time for a short break 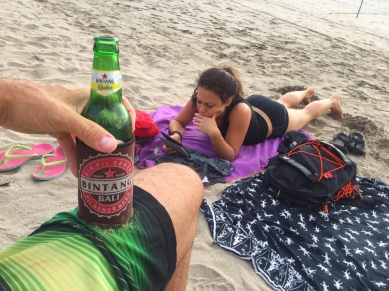 And just like that, we put an end to the first 6 months of this journey, exactly the way it started … at a beach in Bali (thanks to a 36-hour stopover on the way back to Amsterdam), having a good Nasi Goreng for breakfast, a healthy smoothie bowl with a fresh coconut for lunch, a cold Bintang beer in the afternoon and a 1-euro Uber ride back to the hotel at night.

Luck was on our side, as we managed to take the first operating flight from Darwin to Bali and the first one from there to Amsterdam, after the cancellations due to the eruption of Mount Agung.

… and the ultimate trick was that we cheated a little bit and counted this day in Bali as part of the Australian budget (Indonesia was already in the books), so we went for a nice hotel and added some manicure, pedicure and haircut, all for the price of our last lunch in Australia. Life can be tough in South East Asia. 🙂

Now, back to Amsterdam for a few days, to remember what it feels like to wear jeans and a different pair of shoes, recharge batteries and start planning the second half. 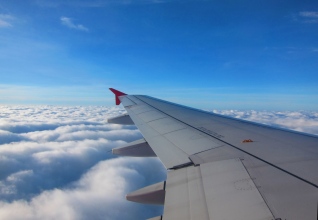 – 6 months thereafter, back to KLM and Dutch NS trains –

4 thoughts on “AUSTRALIA – PART II… Orange is the new Green” 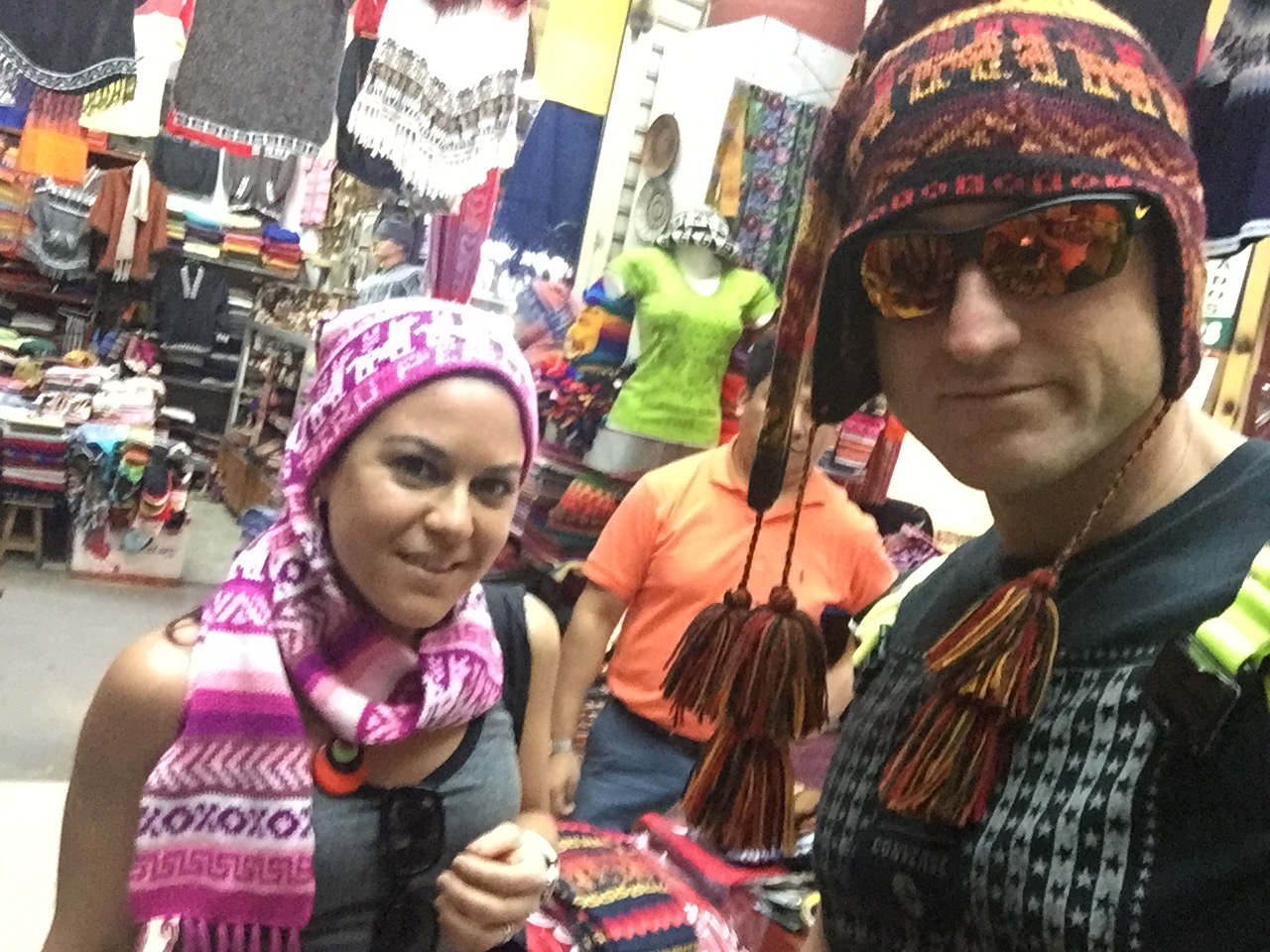