Now that I’m re-reading the title I just wrote, I think I should rather say “First Reflections”. Going into the third day since we landed in Bali -when I’m beginning with this post-, it’s way too soon to answer the question we are already hearing, of: “and?… what’s it like over there?”.  I have, however,  several times found myself writing down thoughts, since we boarded the plane at Schiphol.

Yes, I’ve started carrying pen and paper with me all the time. I’ve realized that those very interesting ideas that come to mind, that you definitely want to write about, last as long as last night’s dream after waking up, unless you put them down in black and white. Haven’t yet figured out how to handle those moments in the shower though, which can be very fruitful in thought-generation.

Back to the thoughts, these first days have been very interesting from a reflection standpoint. We come from a few weeks of craziness, of putting things in boxes, watching the things not yet in boxes multiply themselves ad infinitum, taking boxes to storage, trying to find a tenant for our place, realizing that the real estate agency won’t move a finger outside of “working hours”, trying to keep our livers in one piece, after the N-th farewell night out,  packing our own luggage, realizing we had to take out half of what we wanted to bring (and putting it in boxes)… 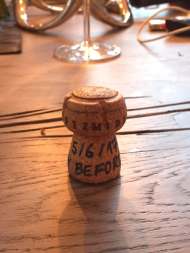 One of the so very rare weeks of great weather in Amsterdam and we spent most of the days sweating indoors (“there’ll be plenty of sunny days to come”, we kept on telling ourselves) and the nights out eating and drinking (and thinking we shouldn’t be spending that money, as the inflow of Euros had already stopped… “This drink probably equals one less night of accommodation in Thailand”, I thought more than once).  At least we had many good friends walking past our door to say bye and wish us luck. That gave us extra boosts of positive energy.

In short, we didn’t really have time to process what was coming.

We ended up dead. Closed the last backpack and took out the last bag of garbage about 2 hours before our flight departed. Amsterdam then decided to release all the rain it had been accumulating for the past weeks, as if saying “oh, now you’re leaving?… back to normal weather then”. Or perhaps to put the impermeability of our brand-new backpacks to the test.

Once up in the air, we managed to bring our heart rates down back to normal levels and think again… Sandra said: “have you realized we won’t sleep on our own bed for at least a year?”. True!… even if we end up cutting our trip short… our place is rented out until mid-2018! That question triggered many others, which started popping up in our minds randomly…

…how will we manage to adjust to the “low budget” approach?

We already had friends recommending THE bests restaurants, beach clubs and activities in every destination…and all I could think of was millions being spent (and I mean literally millions, in case you haven’t seen how many ceros the Indonesian Rupiah have). (Imagine a time gap here). Update, two days after I originally wrote this paragraph: last night we had the first conversation/discussion/debate on this topic… “I’d rather starve to death than eat fried stuff and carbs every day”, she said. “Ok…we’ll have to find the right balance”, was the conclusion. I’ll spare you all the details, but it’s perhaps good to clarify that the conversation/discussion/debate started when Sandra saw my facial expression after she said “look, what a nice sushi restaurant!”).

…for how long will the “tourist chip” last?

I mean the travel mode where you try to fill the day with activities, like in a “normal” 2-week long vacation (for a good friend of mine, if you don’t start the day at 6:30 and are well into your first activity by 8, you are wasting precious holiday time).

… what will we answer when people ask, “what do you do?”

“We used to work for… but now are basically unemployed” doesn’t sound too charming… yet “oh, we don’t work, we just travel the world” sounds a bit too pretentious for my taste. Already with the customs form to enter Indonesia I went back to the old habit of writing “Industrial Engineer” in the “occupation” field. I’ll stick to that, at least for paper forms.

… how much focus should I put on documenting the trip, versus simply living the moment?

I’ve read that many travelers don’t even carry laptops with them… and then there’s me and my various devices.  And now with this whole “Blogging” novelty, I feel I’m kind of generating expectations… also for my own self, by the way. But even beyond the Blog…I’ve always liked immortalizing moments… and it’s happened already that I found myself wondering “is this a GoPro, Canon or iPhone moment?”, and just to be sure I captured it with at least two of them. I’ll definitely need to find the right balance.

… what if we get tired of this lifestyle only after a few months?

As of how long would it already be “worth it” to have gone through everything we did? We’ve always said that the duration of our trip is open, but what if after “only” 4 months we feel it was enough? I certainly hope it’s not the case.

… is this feeling of guilt normal?

Nah… I’m sure that one won’t last.

Right now, it’s about 72 hours since we were dealing with those questions. I must say Sandra couldn’t have found a better place for the initial detox. It’s called Serenity Eco Guesthouse (need I say more?). It’s alcohol and smoke free, they do yoga and meditation classes and the common areas look like a hippy-peace-lovers chillout campsite. You see it and wonder when will you start seeing people pass the dutchies with the left hand side. Then you remember it’s a smoke-free place. Oh, and it’s in Indonesia.

Anyway, for now, a new set of transcendental questions have very quickly started taking center stage, such as “how often should I shave?” …”how do we embed workouts into our daily routine?”… “what’s the time difference with Lima?” … “is 30,000 Rupiah expensive for a meal?” … “coconut or papaya?”

I think we are good to go. 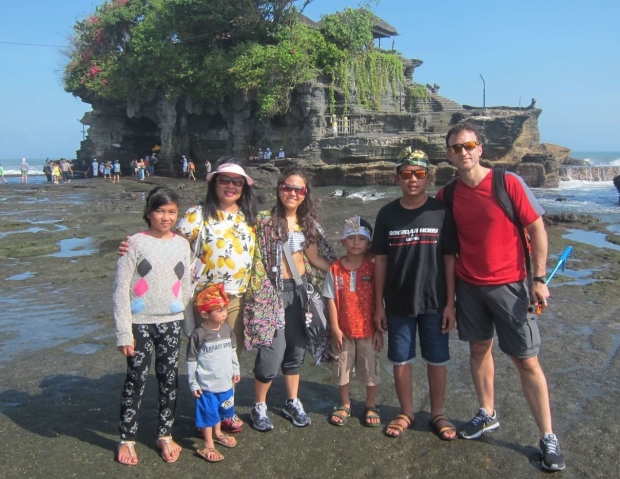 –  (not really, they just asked for a picture with us… must have been my hair) –