So intense. “Incredible India”, their tourist office promotes. And incredible it is. We had heard that you either love it or hate it. It is my pleasure to inform that there is a middle ground. I don’t see us exploring the job-market in Delhi anytime soon, but we had plenty of memorable moments and could definitely come back and explore some of the places we had to skip. Specially if we get the possibility to do it with slightly deeper pockets. And don’t get me wrong, as here we blew our budget for the first time…

… because you can do India going crazy cheap or ultra-luxuriously, but if hygiene and (some) certainty about the safety of the food you eat and the means of transport you use are high in your list, I would strongly suggest NOT to go for the “price: low to high” sorting option when you do your planning. We clicked up a notch or two in all three categories of food, accommodation and transportation and that made the intensity of India be more manageable. 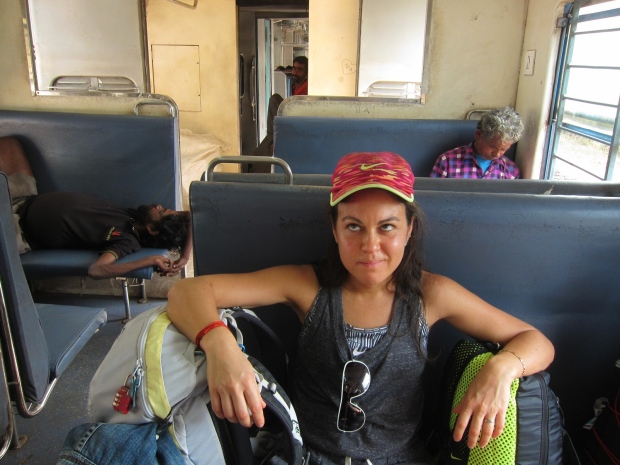 In fact, I believe that where exactly you land in such “love or hate” spectrum can be affected, here more than elsewhere, by the amount of money you spend during your stay in India.

From the general-class train all the way to the Maharaja Express (I had to Google that one… it’s fancy) there are options to suite everyone’s budget. A very common mid-point we saw all over is the “organized visit”, where there will always be a driver waiting for you with your name on a piece of paper, ready to drive you from one predefined activity to the next, minimizing the number of steps you need to walk on Indian soil and eliminating the need -or the possibility- to plan or choose anything yourself. With that, you also get rid of the risk of “getting it wrong” (and, trust me, a wrong guesthouse, train category or even destination in this country can make things very much less enjoyable). In our view, however, with that approach you miss a lot, too. A lot of the food, the places, the people, the little side streets where the bubble you are traveling in does not fit… the room for spontaneity. A question of balance, I imagine, as the 100% you-are-on-your-own modus (that is, our approach), even if more rewarding, can also be much more prone to saturation (trust me on that one as well). And it takes longer as well. 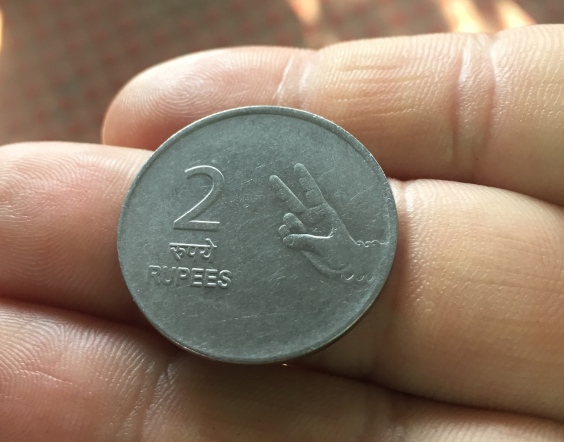 – keep calm and spend those rupees –

How to summarize our 44 days in India?

Not an easy one. We’ve done a lot, seen a lot and learnt a lot, so I’ll split it in two parts, instead of trying to over-summarize it (or lose your attention halfway through). You’ll have to wait for the second part to see what people normally call “the real” India. This first half is only the warm-up.

We spent wonderful days with friends, did meditation and yoga at the beach, enjoyed all shades of masalas (combination of spices) and curries, dodged many cows (and their by-products) and saw many impressive sites. I think I’ll go for the lazy approach and start with the tried-and-tested bullet-point list (blame it on my Power-Point-slide-making-machine years).

So, first some random experiences and thoughts from our India-days. At least the most generic ones… then I’ll continue per location… 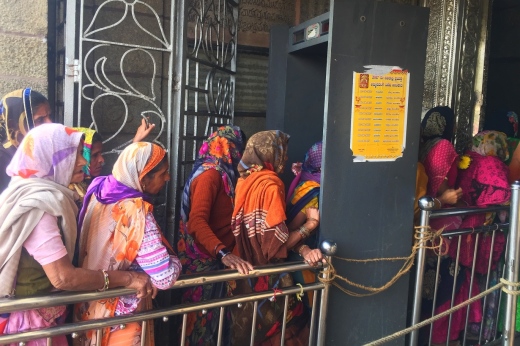 – this one wasn’t even plugged in –

– some do it in style though – 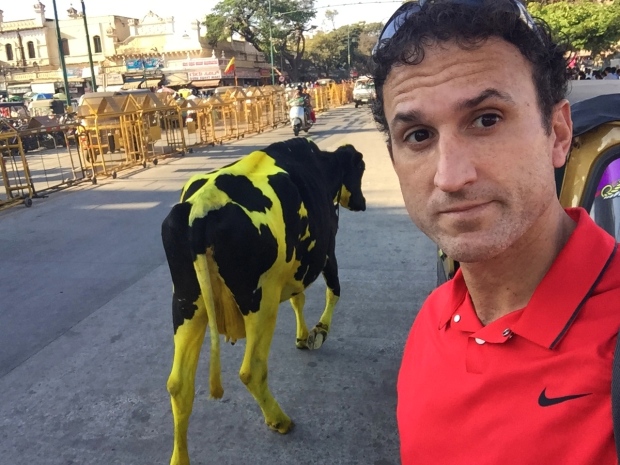 – do not adjust your TV … it is yellow (thanks to turmeric) – 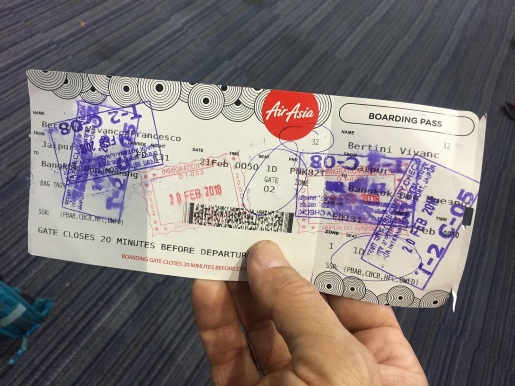 – and not all of them stamped it –

Great decision to start with the south, as there the “India cultural shock” so many people had warned us about just didn’t happen (and well… the fact we are from Peru and not say from Finland, probably helped as well).

Our arrival already surpassed expectations, with a shiny brand new, solar-powered airport with water fountains with three temperatures to choose from, an Uber station and no flock of harassing taxi drivers trying to get to your wallet (did anyone say Bali?).  We stayed at a true homestay, where the owners Roy and Leelu almost adopted us as their children. Leelu gave us cooking lessons and, when we left, Roy asked us to send him a text to let know we had arrived safely.  Lovely couple. 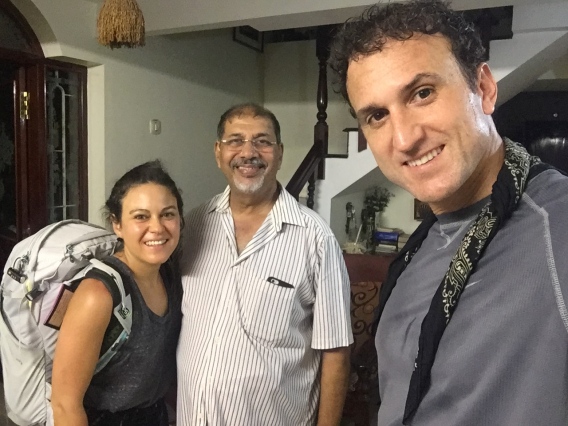 Here we already had our first realization of how strong the difference in social classes is in India. Just have a conversation with any highly-educated person and you soon realize they think “just like you”, meaning a totally “western-compatible mentality”, unlike in other countries from the (further) East, where in my experience it’s more evident that the mental-chip has different factory settings (I dare you to try to explain something with hand signs to a Chinese person). They rant about the lack of civism, about the rubbish on the streets, about the honking and about the same things you as a visitor will probably rant. Taxi driver, hostel clerk, waiter… you can almost smell the level of education the moment you step in.

And yes, there’s a lot of rubbish on the streets. We saw some canals that made us want to go back to Amsterdam and rinse our tooth brushes in its “pristine” waters. The backwaters (which make this state of Kerala famous) were nice though… check the pics.

Something smells fishy around here. // Algo por aquí me huele a pescado. 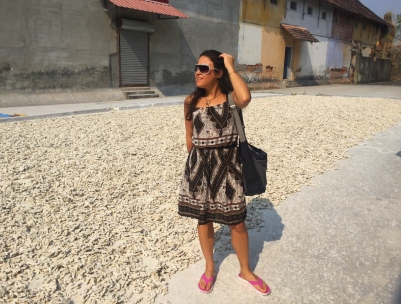 Where does that smell of ginger come from? // De dónde vendrá ese olor a jengibre? 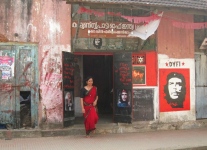 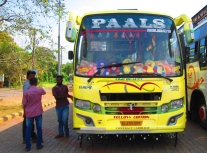 Captain with a stick. // Piloteando a punta de palo. 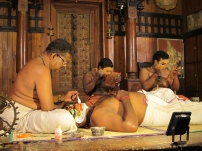 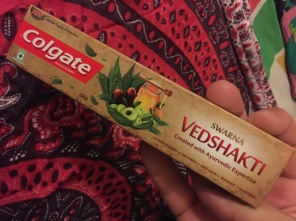 Two places we visited for only one reason, the lovely Barthur family. It was always in the list to visit my good-old friend (and squash apprentice) Abi in Bangalore, but thanks to him we also stayed with his wonderful parents in Mysore, learning about India, eating awesome home-made food and getting great guidance to plan the rest of our Indian adventure. Abi would later become our train-booking manager, magically finding tickets for sold-out rides, every time.

Both with the Barthur parents as with Abi, wife Mukta and lovely little Meera, we felt as if we were part of the family. Great conversations and great family time. Another confirmation that the best thing you can do while traveling is to spend time with someone not interested in trying to sell you something. 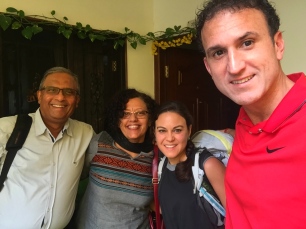 Oh, and I’m proud to have introduced Meera to the magical world of Mickey Mouse, thanks to my signature “Hello my Friends,… I am Mickey, Mickey Mouse” (read in high-pitched voice).

In Mysore we saw one of the most impressive palaces we’ve seen so far, in Bangalore we had our first experience with Indian markets and with the India Metro. Unbelievably clean and ordered, with people in almost military straight lines waiting for the other passengers to get out before going in. We felt like every metro station was a parallel reality… as if those metal detectors at the entrance (of course) would be portals into the Matrix. 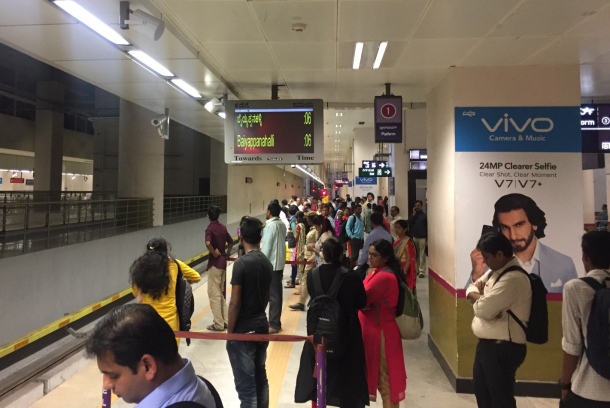 Here we also learnt about the impact that language can have in the life of people. Both Abi and Mukta are Indian, born and raised. In different states, though. So, they communicate in English and can’t understand what the other one is saying to their daughter in their own local language. Strange thought, huh? There are so many different local languages -Hindi is the official common one, but many people don’t use it –  that the “cross-state” interaction (not to mention marriage) becomes challenging (and I won’t even try to explain the challenges posed by differences in religion and social casts). 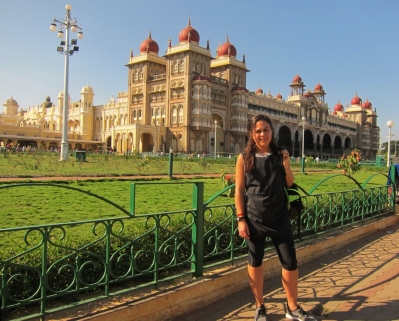 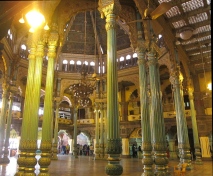 And from the inside. // Y desde adentro. 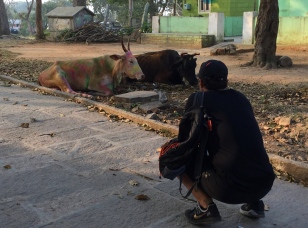 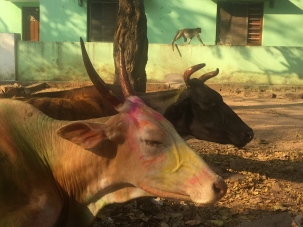 But managed to get to Bangalore! // Pero llegamos a Bangalore! 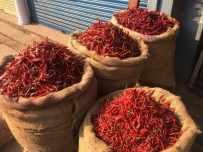 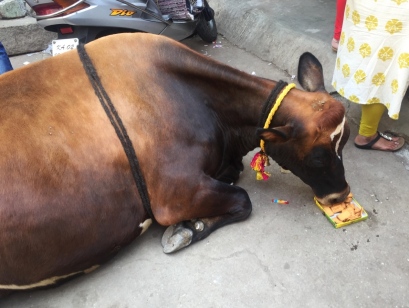 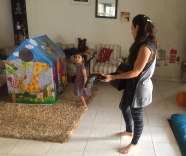 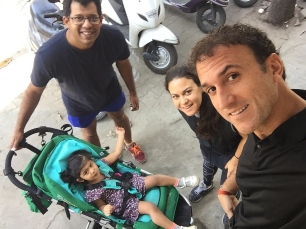 Taking little Meera for a ride. // Paseando a la pequeña.

Blurry, but I still love this one. // Borrosa, pero igual me gustó.

The smallest, most western-feeling state. A little piece of Portugal in India. “The” beach destination in India. We spent one day in old-Goa, hearing more stories about locals killed by Portuguese killed by Dutch killed by British, colonized and then liberated. The usual drill.

Then, straight to a beach bungalow, where we laughed at our planned daily budget on a western-priced week-long Yoga retreat. Totally worth it. We loved the experience.  Every day, pranayama (breathing) session, yoga in the morning, meditation, yoga in the afternoon and, in-between, not much more to do than swim in the ocean, lay in the hammock, get a massage, play the ukulele, see the sunset and enjoy the yummy vegan food provided and the nice company. Awesome days. 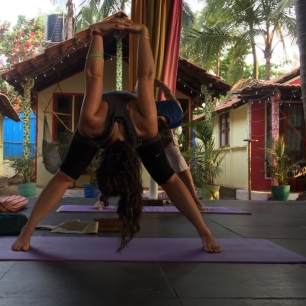 Also interesting to observe the other guests, most of them following a yoga-teacher training, some still with acne problems -so you get an idea of the average age- and talking about how cool it is to be a vegan and how they finally “converted” when they found themselves crying after seeing someone kill an ant. Later I saw one of them wearing her fashionable and very leathery leather sandals, but thought it was wiser not to say anything about it.

Speaking of vegans, somewhere I heard that the gases generated by all vegans in the world (you know, plenty of beans, lentils and soy in their diet) cause more harm to the atmosphere than the pollution generated by all factories in China. I’m not sure if the statement came from a certified scientific source though, so let’s just call it a joke. 😊

Anyway, we truly enjoyed that week, met some great people, did about 8578 urdhva-mukhas, aadho-mukhas and chaturangas (yoga lingo, baby), chanted mantras in Sanskrit and twisted our bodies into positions I believed were not feasible, from classics like the ones mentioned to the more westernized “ninja”, “crow”, “stargazer” and -one of my favorites – “wild thing”.  Yeah.  I mean, Om.

Welcome to Goa. // Llegandito a Goa. 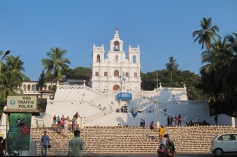 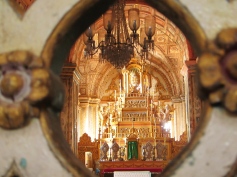 Does anyone else remember Teem? // Se acuerdan de la Teem?? Ya no hay no?

This is Kranti. // Kranti en persona.

And this was our view. // Nuestra vista. 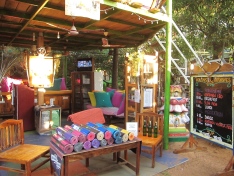 We had to leave our mats behind. // Abandonando nuestras Yoga “mats” (me rehuso a decirle alfombrilla o tapete) 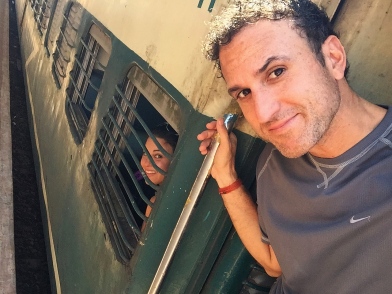 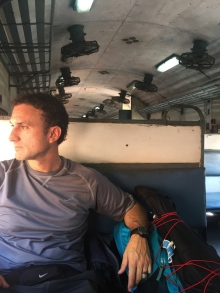 And no, the fans didn’t all work either. // Y no, tampoco funcionaban todos los ventiladores.

And I’ll break it here, to keep the post at a reasonable length… the second half is almost ready as well, though, so expect it very soon 😉.

Oh, almost forgot about the final video…  I though I’d share a bit of the introduction our guide gave us, to the tour through the backwaters near Kochi. That guide was the best.

– yes, he is speaking in English, in case you weren’t sure –